How Many Cups of Coffee Do Americans Drink Each Day

According to the Statista Global Consumer Survey, drinking two to three cups each day is the most common coffee consumption pattern among Americans. 44 percent of U.S. adults said that they drank this many 7 oz. cups per day on average. The second most common answer – which will make many coffee lovers shake their heads in disbelief – was one cup or no coffee at all. 26 percent said they fell into that category.

In fact, in the latest installment of the Statista survey, only 65 percent of Americans listed coffee as a beverage they regularly consumed.

The most popular type of coffee in the U.S. is good old drip coffee, with 63 percent saying they consumed it. 22 percent of Americans said they drank iced coffee, followed by instant coffee (18 percent) in third place. 50 percent of American adults agreed with the statement “coffee is pure pleasure to me”. 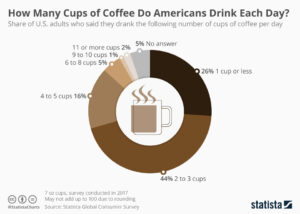